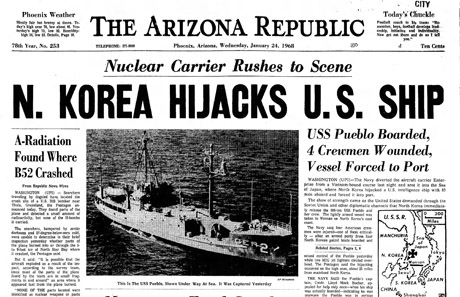 When North Korea captured the American surveillance ship USS Pueblo, it sparked an 11-month crisis that threatened to worsen already high Cold War tensions in the region.
The trouble started with the Pueblo. It had been nearly 15 years since the Korean War between U.S.-led forces and the North. The Navy intelligence ship was monitoring North Korea from the Tsushima Strait, an ocean channel dividing Korea and Japan.
The Navy said its ship was operating in international waters, but North Korea said the Pueblo had entered its territory, and dispatched warships and aircraft to intercept it. Accounts differ on both sides as to what really happened. Eventually, there was an exchange of gunfire. U.S. crewman Duane Hodges was killed.

The North Korean military boarded the Pueblo, captured its crew and brought the ship to port in North Korea.

The Pueblo’s 82 surviving crew members reported that while in custody, they were held at a POW camp where they were tortured and starved.

North Korea staged a news conference during which the crew was forced to applaud the North Koreans for treating them kindly.

During the news conference crew members laced their comments with sarcasm and extended their middle fingers in defiance.

When North Korea learned later that the Americans had mocked them, the crew was severely beaten.

After months of negotiations, North Korea agreed to free the crewmen after the United States.

Acknowledged that the Pueblo had been spying and promised not to spy in the future.
On December 23, the crew was allowed to safely return to South Korean territory. Immediately, the U.S. retracted its acknowledgments.
The crew was home in time for Christmas. But the USS Pueblo remains in North Korean custody.