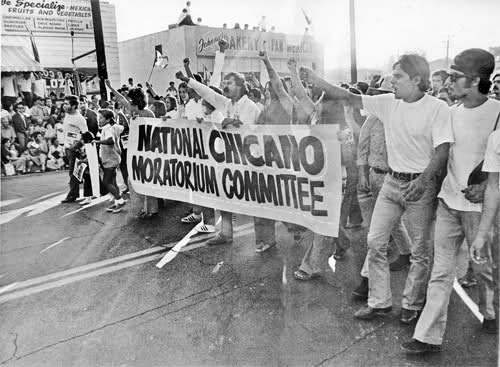 The East Los Angeles Walkouts or Chicano Blowouts were a series of 1968 protests by Chicano students against unequal conditions in Los Angeles Unified School District high schools. The first protest took place on March 1, 1968. The students who organized and carried out the protests were primarily concerned with the quality of their education. This movement (which involved thousands of students in the Los Angeles area) was of the first mass mobilizations by Mexican-Americans in Southern California.

During the 1950s and 1960s, Mexican Americans took part in the national quest for civil rights, fighting important court battles and building social and political movements. Mexican-American youth in particular became politicized, having taken advantage of many opportunities their parents never had.

In a radio interview, Moctesuma Esparza, one of the original walkout organizers, talked about his experiences as a high school student fighting for Chicano rights. Esparza first became involved in activism in 1965 after attending a youth leadership conference. He helped organize a group of Chicano teenagers, Young Citizens for Community Action. This group eventually evolved into Young Chicanos For Community Action, then later as the Brown Berets, still fighting for Mexican-American equality in California.

Esparza graduated 12th grade in 1967, and enrolled at UCLA. He and fellow Chicano students continued organizing protests. He and eleven friends started a group called UMAS. UMAS traveled around to universities recruiting Chicano students who wanted to help increase Chicano enrollment in colleges. UMAS members decided to split up into smaller groups, with each group to mentor students at particular L.A. high schools with high minority enrollment, as well as high drop out rates. Garfield, Roosevelt, Lincoln, Belmont and Wilson high school (all of which were involved in the walkouts) had among the highest dropout rates within the Los Angeles City Schools – Garfield being the school with the highest drop out rates in the city (57.5% of students), with Roosevelt having the second highest dropout rates in Los Angeles City Schools (45% of students). Conditions at these schools also motivated the students to organize and walkout. These conditions were not only related to the high drop out rates of the high schools, but also were related to the fact that classrooms were overcrowded (with about 40 students in a classroom), reading scores for the students were low, school administration were understaffed, leaving, at times, one school counselor to 4,000 students, classroom material not reflecting the realities of the majority Chicano/a students (such as within history classes), as well as the belittling attitude with which the teachers treated students.  The attitude staff held towards students was reflected in a letter written by a teacher at Lincoln High School, Richard Davis, which stated,

Most of the Mexican-Americans have never had it so good. Before the Spanish came, he was an Indian grubbing in the soil, and after the Spaniards came he was a slave. It seems to me that America must be a very desirable place, witness the number of “wetbacks” and migrants both legal and illegal from Mexico.

Wanting to do something to improve their school system and the conditions with which they were being faced, the students decided to organize. Esparza and Larry Villalvazo and a few other UMAS members, along with teacher Sal Castro, helped organize hundreds of students to walkout of classes in 1968 protests to highlight the conditions that they faced. After a few days, they were joined by numerous additional protesters. Following the large number of students involved with the protest, the attention of the school board was gained, and they agreed to meet with students to listen to their demands.

The student walkouts began in East Los Angeles High schools on March 1, 1968. The first students to walk out were from Wilson High School, which was among the high schools in the Los Angeles area with the highest dropout rates (21.8% of students dropped out from high school in 2016). Though students had been organizing for some time and were planning to engage in the widespread protest of walking out to demonstrate against what were deemed less than satisfactory conditions, the first of the walkouts at Wilson were unplanned, having been motivated by the schools principal cancelling a student produced play which was deemed inappropriate for the students to perform.  During this walkout at Wilson more than 200 students were involved; it was following this that students across numerous high schools in East Los Angeles also began the blowout process, with reported numbers of those involved in the walkout being between 2,000 and 5,000 students (within Lincoln, Roosevelt, and Garfield high school).