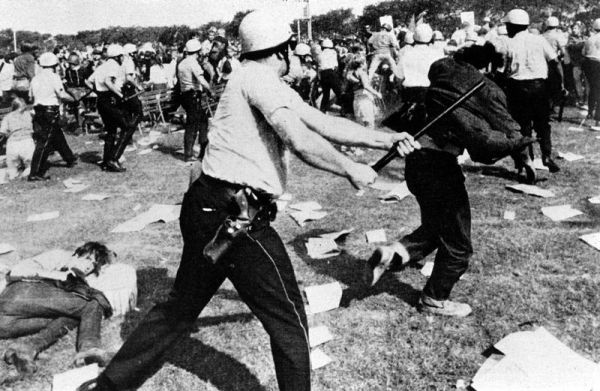 Mayor Richard Daley opens the Democratic National Convention in Chicago. While the convention moves haltingly toward nominating Hubert Humphrey for president, the city’s police attempt to enforce an 11 o’clock curfew. On that Monday night demonstrations are widespread, but generally peaceful. The next two days, however, bring increasing tension and violence to the situation.

By most accounts, on Wednesday evening Chicago police take action against crowds of demonstrators without provocation. The police beat some marchers unconscious and send at least 100 to emergency rooms while arresting 175.
Mayor Daley tried the next day to explain the police action at a press conference.  He famously explained: “The policeman isn’t there to create disorder, the policeman is there to preserve disorder.”
Twenty-eight years later, when the Democrats next held a convention in Chicago, some police officers still on the force wore t-shirts proclaiming, “We kicked their father’s butt in ’68 and now it’s your turn.”