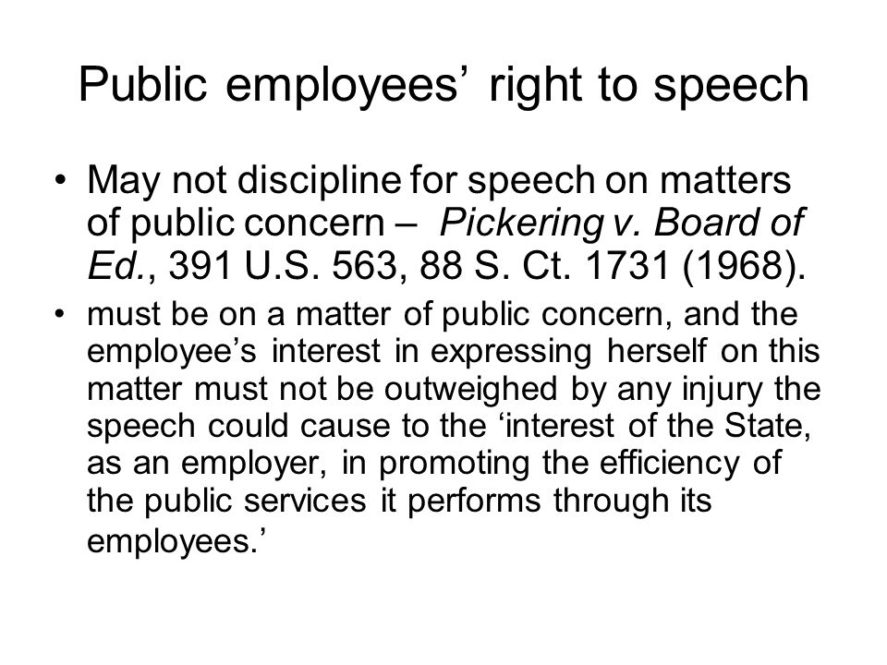 Facts:
A high school science teacher wrote a letter to the editor of a community newspaper, criticizing the board of education’s allocation of funds between academics and athletics. The school board terminated the teacher, saying that the letter contained false statements that impugned the integrity of the school system. The teacher sued, claiming that the board violated his First Amendment rights by terminating him for exercising his right to freedom of speech.

Issue:
Whether school officials violate the First Amendment by terminating a teacher for writing a letter to the editor that discusses important matters of public concern.

Holding:
By a 8-1 vote, the Court held that school officials do violate the First Amendment when they terminate a public school teacher for speaking out as a citizen on matters of public concern.

Reasoning:
Public school teachers, as public employees, are entitled to some First Amendment protections. “The problem in any case is to arrive at a balance between the interests of the teacher, as a citizen, in commenting upon matters of public concern and the interests of the State, as an employer, in promoting the efficiency of the public services it performs through its employees.” In this case, the teacher was speaking more as a citizen than as an employee when he wrote the letter to the editor. The statements in the letter did not target any school official that the teacher dealt with on a daily basis.

Majority:
“While criminal sanctions and damage awards have a somewhat different impact on the exercise of the right to freedom of speech from dismissal from employment, it is apparent that the threat of dismissal from public employment is nonetheless a potent means of inhibiting speech.” (Justice Thurgood Marshall)