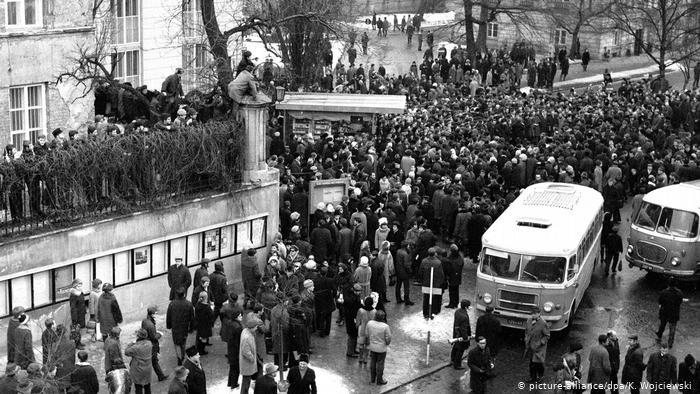 The Polish 1968 political crisis, also known in Poland as March 1968 or March events (Polish: Marzec 1968; wydarzenia marcowe), pertains to a series of major student, intellectual and other protests against the government of the Polish People’s Republic. The crisis resulted in the suppression of student strikes by security forces in all major academic centres across the country and the subsequent repression of the Polish dissident movement. It was also accompanied by mass emigration following an antisemitic (branded “anti-Zionist”) campaign waged by the minister of internal affairs, General Mieczysław Moczar, with the approval of First Secretary Władysław Gomułka of the Polish United Workers’ Party (PZPR). The protests coincided with the events of the Prague Spring in neighboring Czechoslovakia – raising new hopes of democratic reforms among the intelligentsia. The unrest culminated in the Warsaw Pact invasion of Czechoslovakia on 20 August 1968.

The anti-Jewish campaign had already begun in 1967. The policy was carried out in conjunction with the Soviet withdrawal of all diplomatic relations with Israel after the Six-Day War, but also involved a power struggle within the Polish communist party itself. The subsequent purges within the ruling party, led by Mieczysław Moczar and his faction, failed to topple Gomułka’s government, but resulted in an exile from Poland of thousands of individuals of Jewish ancestry, including professionals, party officials and secret police functionaries. In carefully staged public displays of support, factory workers across Poland were assembled to publicly denounce Zionism.  At least 13,000 Poles of Jewish origin emigrated in 1968–72 as a result of being fired from their positions and various other forms of harassment.