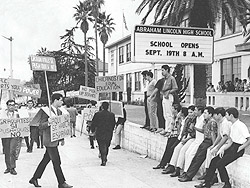 The Mexican Student Movement of 1968 was a student movement against the ruling Institutional Revolutionary Party (PRI), which occurred in the context of the buildup to the 1968 Summer Olympics in Mexico City and the worldwide protests that year.  The events that happened from July–October 1968 are colloquially called Mexico 68.

For several years prior to the protests, Mexico had experienced a period of strong economic performance called the Mexican miracle. The government wanted to showcase this progress to the world during the Olympics. However, the economic growth hadn’t been spread evenly, and students saw an opportunity to bring reforms and more democracy to Mexico.  Arising from reaction to the government’s violent repression of fights between rival porros (gangs), the student movement in Mexico City quickly grew to include large segments of the student body who were dissatisfied with the regime of the PRI.

The 1968 Olympic Games took place in Mexico, making it the first developing country to host this event. This represented an important source of income to the country because of the tourists who would come to attend the Olympics. Giving a good impression to the world could lead to the introduction of international investors. However the students were against these ideals. They did not believe that the appearance of Mexico to the world was a priority. They preferred a revolution resulting in the reformation of their country. “No queremos Olimpiadas, queremos revolución” (We do not want Olympic Games, we want a revolution).  The IOC threatened to move the Games to Los Angeles if the situation deteriorated