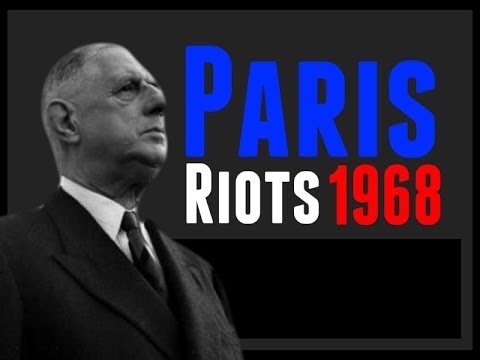 The volatile period of civil unrest in France during May 1968 was punctuated by demonstrations and massive general strikes as well as the occupation of universities and factories across France. At the height of its fervor, it brought the entire economy of France to a virtual halt. The protests reached such a point that political leaders feared civil war or revolution; the national government itself momentarily ceased to function after President Charles de Gaulle secretly fled France for a few hours. The protests spurred an artistic movement, with songs, imaginative graffiti, posters, and slogans.

“May 68” affected French society for decades afterward. It is considered to this day as a cultural, social and moral turning point in the history of the country. As Alain Geismar—one of the leaders of the time—later pointed out, the movement succeeded “as a social revolution, not as a political one”.

The unrest began with a series of student occupation protests against capitalism, consumerism, American imperialism and traditional institutions, values and order. It then spread to factories with strikes involving 11 million workers, more than 22% of the total population of France at the time, for two continuous weeks. The movement was characterized by its spontaneous and de-centralized wildcat disposition; this created contrast and sometimes even conflict between itself and the establishment, trade unions and workers’ parties. It was the largest general strike ever attempted in France, and the first nationwide wildcat general strike.

The student occupations and wildcat general strikes initiated across France were met with forceful confrontation by university administrators and police. The de Gaulle administration’s attempts to quell those strikes by police action only inflamed the situation further, leading to street battles with the police in Paris’s Latin Quarter, followed by the spread of general strikes and occupations throughout France. De Gaulle fled to a French military base in Germany, and after returning dissolved the National Assembly, and called for new parliamentary elections for 23 June 1968. Violence evaporated almost as quickly as it arose. Workers went back to their jobs, and when the elections were finally held in June, the Gaullist party emerged even stronger than before.