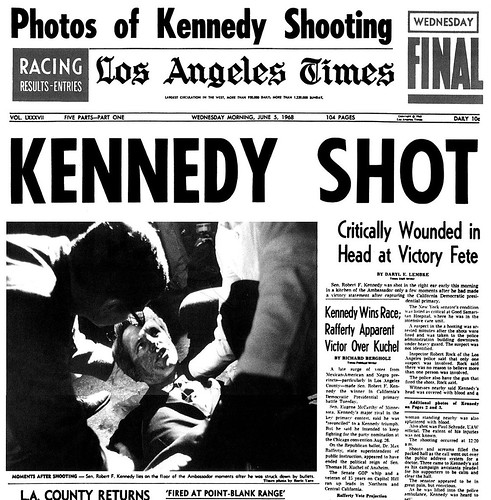 On June 5, 1968, 42-year-old presidential candidate Robert F. Kennedy was mortally wounded shortly after midnight PDT at the Ambassador Hotel in Los Angeles. He had just won the California presidential primaries in the 1968 election.
After winning the California and South Dakota primary elections for the Democratic nomination for President of the United States, Kennedy left the podium in the Ambassador Hotel and was exiting through the hotel kitchen when he was mortally wounded by Sirhan Sirhan who fired multiple shots with a handgun. Kennedy died in the Good Samaritan Hospital twenty-six hours later. Sirhan, a 24-year-old Palestinian/Jordanian immigrant, was convicted of murdering Kennedy and sentenced to death in 1969; his sentence was commuted to life in prison in 1972. A freelance newspaper reporter recorded the shooting on audio tape, and the aftermath was captured on film.
Kennedy’s remains were taken to St. Patrick’s Cathedral in Manhattan for two days of public viewing before a funeral Mass was held on June 8. His funeral train traveled from New York City to Washington, D.C; throngs of spectators lined the route to view the journey. His body was interred at night at Arlington National Cemetery near his brother John. His death prompted the United States Secret Service to protect presidential candidates. Hubert Humphrey, the sitting Vice President at the time and also a presidential candidate, later went on to win the Democratic nomination for the presidency, but ultimately lost the election to Republican Richard Nixon.
As with the death of his brother John, the assassination of Robert Kennedy and the circumstances surrounding it have spawned a variety of conspiracy theories. Kennedy and Huey Long of Louisiana (in 1935) are the only two sitting United States Senators to be assassinated.