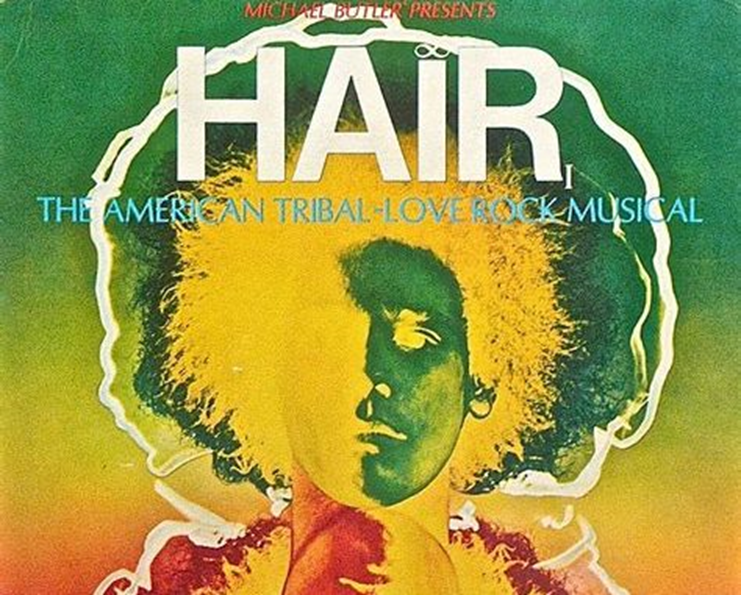 Hair: The American Tribal Love-Rock Musical is a rock musical with a book and lyrics by Gerome Ragni and James Rado and music by Galt MacDermot. A product of the hippie counterculture and sexual revolution of the late 1960s, several of its songs became anthems of the anti-Vietnam War peace movement. The musical’s profanity, its depiction of the use of illegal drugs, its treatment of sexuality, its irreverence for the American flag, and its nude scene caused much comment and controversy.

The musical broke new ground in musical theatre by defining the genre of “rock musical”, using a racially integrated cast, and inviting the audience onstage for a “Be-In” finale. Hair tells the story of the “tribe”, a group of politically active, long-haired hippies of the “Age of Aquarius” living a bohemian life in New York City and fighting against conscription into the Vietnam War. Claude, his good friend Berger, their roommate Sheila and their friends struggle to balance their young lives, loves, and the sexual revolution with their rebellion against the war and their conservative parents and society. Ultimately, Claude must decide whether to resist the draft as his friends have done, or to succumb to the pressures of his parents (and conservative America) to serve in Vietnam, compromising his pacifist principles and risking his life.

After an off-Broadway debut on October 17, 1967, at Joseph Papp’s Public Theater and a subsequent run at the Cheetah nightclub from December 1967 through January 1968, the show opened on Broadway in April 1968 and ran for 1,750 performances. Simultaneous productions in cities across the United States and Europe followed shortly thereafter, including a successful London production that ran for 1,997 performances. Since then, numerous productions have been staged around the world, spawning dozens of recordings of the musical, including the 3 million-selling original Broadway cast recording. Some of the songs from its score became Top 10 hits, and a feature film adaptation was released in 1979. A Broadway revival opened in 2009, earning strong reviews and winning the Tony Award and Drama Desk Award for Best Revival of a Musical. In 2008, Time wrote, “Today Hair seems, if anything, more daring than ever.”[3]