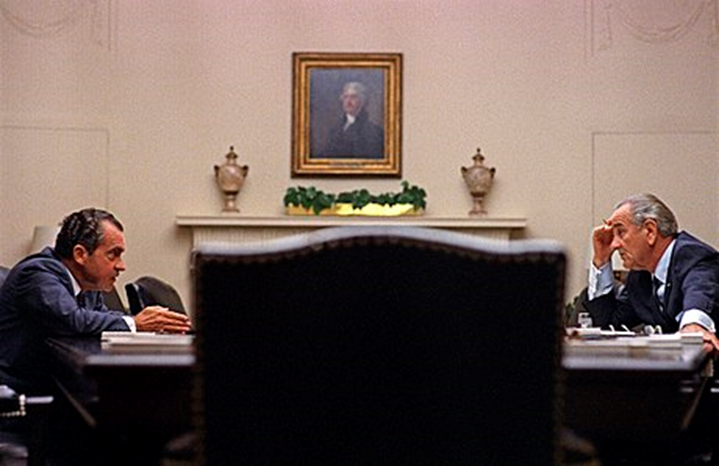 Winning one of the closest elections in U.S. history, Republican challenger Richard Nixon defeats Vice President Hubert Humphrey. Because of the strong showing of third-party candidate George Wallace, neither Nixon nor Humphrey received more than 50 percent of the popular vote; Nixon beat Humphrey by less than 500,000 votes.

Nixon campaigned on a platform designed to reach the “silent majority” of middle class and working class Americans. He promised to “bring us together again,” and many Americans, weary after years of antiwar and civil rights protests, were happy to hear of peace returning to their streets. Foreign policy was also a major factor in the election. Humphrey was saddled with a Democratic foreign policy that led to what appeared to be absolute futility and agony in Vietnam. Nixon promised to find a way to “peace with honor” in Vietnam, though he was never entirely clear about how this was to be accomplished.

The American people, desperate to find a way out of the Vietnam quagmire, were apparently ready to give the Republican an opportunity to make good on his claim.

During his presidency, Nixon oversaw some dramatic changes in U.S. Cold War

foreign policy, most notably his policy of detente with the Soviet Union and his 1972 visit to communist China. His promise to bring peace with honor in Vietnam, however, was more difficult to accomplish. American troops were not withdrawn until 1973, and South Vietnam fell to communist forces in 1975

Nixon ended American involvement in the war in Vietnam in 1973 and brought the American POWs home, and ended the military draft. Nixon’s visit to China in 1972 eventually led to diplomatic relations between the two nations and he initiated détente and the Anti-Ballistic Missile Treaty with the Soviet Union the same year. His administration generally transferred power from Washington D.C. to the states. He imposed wage and price controls for ninety days, enforced desegregation of Southern schools, established the Environmental Protection Agency and began the War on Cancer. Nixon also presided over the Apollo 11 moon landing, which signaled the end of the moon race. He was reelected in one of the largest electoral landslides in U.S. history in 1972 when he defeated George McGovern. In his second term, Nixon ordered an airlift to resupply Israeli losses in the Yom Kippur War, resulting in the restart of the Middle East peace process and an oil crisis at home. The Nixon administration supported a coup in Chile that ousted the government of Salvador Allende and propelled Augusto Pinochet to power. By late 1973, the Watergate scandal escalated, costing Nixon much of his political support. On August 9, 1974, he resigned in the face of almost certain impeachment and removal from office. After his resignation, he was issued a controversial pardon by his successor, Gerald Ford. In 20 years of retirement, Nixon wrote nine books and undertook many foreign trips, helping to rehabilitate his image into that of an elder statesman. He suffered a debilitating stroke on April 18, 1994 and died four days later at the age of 81.