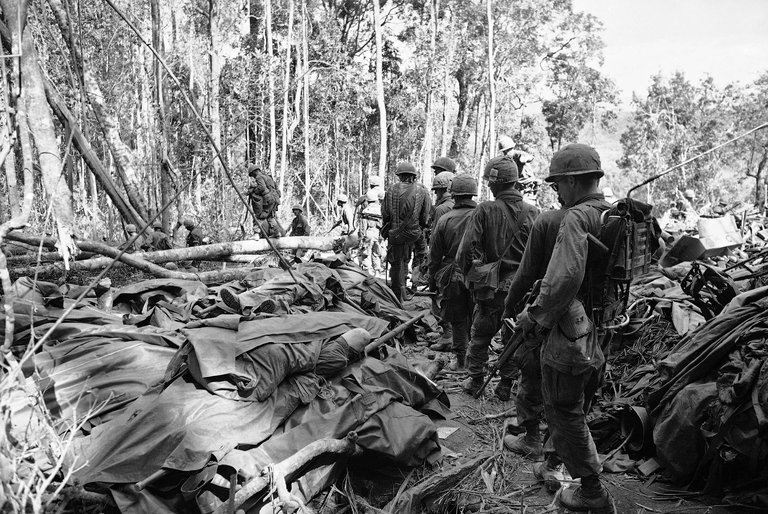 The Tet Offensive (Vietnamese: Sự kiện Tết Mậu Thân 1968), or officially called The General Offensive and Uprising of Tet Mau Than 1968 (Vietnamese: Tổng Tiến công và Nổi dậy Tết Mậu Thân 1968) by North Vietnam and the NLF (National Liberation Front), was one of the largest military campaigns of the Vietnam War, launched on January 30, 1968, by forces of the Viet Cong and North Vietnamese People’s Army of Vietnam against the forces of the South Vietnamese Army of the Republic of Vietnam, the United States Armed Forces, and their allies. It was a campaign of surprise attacks against military and civilian command and control centers throughout South Vietnam. The name of the offensive comes from the Tết holiday, the Vietnamese New Year, when the first major attacks took place.
The North Vietnamese launched a wave of attacks in the late night hours of 30 January in the I and II Corps Tactical Zones of South Vietnam. This early attack did not lead to widespread defensive measures. When the main North Vietnamese operation began the next morning, the offensive was countrywide and well coordinated; eventually more than 80,000 North Vietnamese and Viet Cong troops struck more than 100 towns and cities, including 36 of 44 provincial capitals, five of the six autonomous cities, 72 of 245 district towns, and the southern capital. The offensive was the largest military operation conducted by either side up to that point in the war.
Though initial attacks stunned both the U.S. and South Vietnamese armies, causing them to temporarily lose control of several cities, they quickly regrouped, beat back the attacks, and inflicted heavy casualties on North Vietnamese forces. During the Battle of Huế, intense fighting lasted for a month, resulting in the destruction of the city. During their occupation, the North Vietnamese executed thousands of people in the Massacre at Huế. Around the U.S. combat base at Khe Sanh, fighting continued for two more months. The offensive was in America initially considered as military defeat for North Vietnam, but as general Westmoreland reported that completing the Vietcong’s defeat would necessitate 200,000 more American soldiers and require an activation of the reserves, even loyal supporters of the war effort began to see that a change in strategy was needed. Instead it had a profound effect on the U.S. government and shocked the U.S. public, which had been led to believe by its political and military leaders that the North Vietnamese were being defeated and incapable of launching such an ambitious military operation; American public support for the war soon declined and the U.S. sought negotiations to end the war.
The term “Tet Offensive” usually refers to the January–February 1968 offensive, but it can also include the so-called “Mini-Tet” offensives that took place in May and August, or the 21 weeks of unusually intense combat which followed the initial attacks in January.