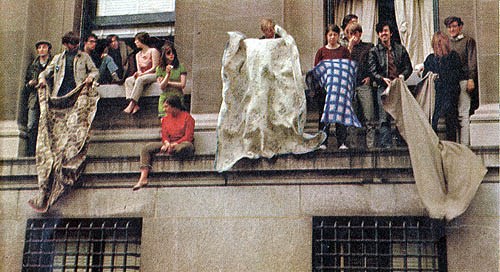 April 23 A rally and occupation of the Low administrative office building at Columbia University, planned to protest the university’s participation in the Institute for Defense Analysis is scuttled by conservative students and university security officers. The demonstrators march to the site of a proposed new gymnasium at Morningside Heights to stage a protest in support of neighbors who use the site for recreation. The action eventually results in the occupation of five buildings – Hamilton, Low, Fairweather and Mathematics halls, and the Architecture building. It will culminate seven days later when police storm the buildings and violently remove the students and their supporters at the Columbia administration’s request.