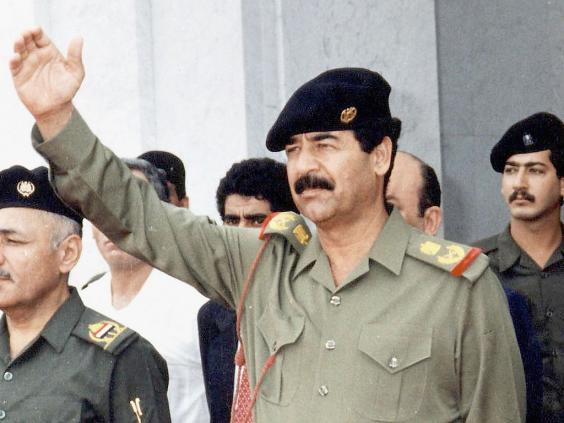 The Iraqi Revolutionary Command Council was established after the military coup in 1968, and was the ultimate decision making body in Iraq before the 2003 American-led invasion. It exercised both executive and legislative authority in the country, with the Chairman and Vice Chairman chosen by a two-thirds majority of the council.

In July 1968, Saddam participated in a bloodless coup led by Ahmed Hassan al-Bakr that overthrew Abdul Rahman Arif, Salam Arif’s brother and successor. While Saddam’s role in the coup was not hugely significant (except in the official account), Saddam planned and carried out the subsequent purge of the non-Ba’athist faction led by Prime Minister Abd ar-Razzaq an-Naif, whose support had been essential to the coup’s success.

According to a semi-official biography, Saddam personally led Naif at gunpoint to the plane that escorted him out of Iraq.[44] Arif was given refuge in London and then Istanbul. Al-Bakr was named president and Saddam was named his deputy, and deputy chairman of the Ba’athist Revolutionary Command Council. According to biographers, Saddam never forgot the tensions within the first Ba’athist government, which formed the basis for his measures to promote Ba’ath party unity as well as his resolve to maintain power and programs to ensure social stability. Although Saddam was al-Bakr’s deputy, he was a strong behind-the-scenes party politician. Al-Bakr was the older and more prestigious of the two, but by 1969 Saddam clearly had become the moving force behind the party.

The Chairman was also then declared the President of Iraq and he was then allowed to select a Vice President.

After Saddam Hussein became President of Iraq in 1979 the council was led by deputy chairman Izzat Ibrahim ad-Douri, deputy Prime Minister Tariq Aziz, and Taha Yassin Ramadan, who had known Saddam since the 1960s.The legislature was composed of the RCC, the National Assembly and a 50-member Kurdish Legislative Council which governed the country. During his presidency, Saddam was Chairman of the RCC and President of the Republic. Other members of the RCC included Salah Omar Al-Ali who held the position between 1968 and 1970, one of Saddam’s half-brothers, Barzan Ibrahim al-Tikriti, Taha Yasin Ramadan, Adnan Khairallah, Sa’adoun Shaker Mahmoud, Tariq Aziz Isa, Hasan Ali Nassar al-Namiri, Naim Hamid Haddad and Taha Mohieddin Maruf. It was officially dissolved on 23 May 2003 by Paul Bremer per Order Number 2 of the Coalition Provisional Authority.