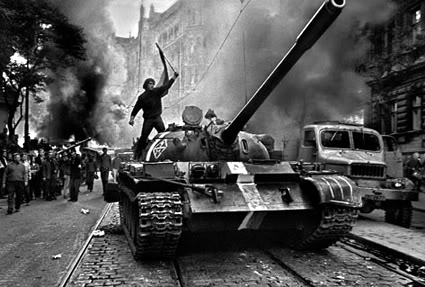 1. January 5th Alexander Dubcek becomes the First Secretary of the Communist Party of Czechoslovakia
2. April 5th Alexander Dubcek and the Communist Party of Czechoslovakia call for the acknowledgment of individual liberties, the introduction of political and economic reforms, and a change in the structure of the nation. “Action Programme”
3. April 5th “Action Programme” includes proposed reforms to limit the power of the secret police and formal abolishment of censorship
4. June 26th Following formal abolishment of censorship anti-Soviet editorials appear in the press
5. August 20th and 21st Eastern Bloc armies consisting of 200,000 troops and 2,000 tanks from four Warsaw Pact countries – the Soviet Union, Bulgaria, Poland and Hungary invade Czechoslovakia / CSSR
6. August 21st Dubcek and other reformers are taken into Soviet custody and flown to Moscow
7. August 26th Dubcek and other reformers accede to Soviet demands and sign the Moscow protocols promising to protect socialism in Czechoslovakia
8. August 28th Dubcek and most of the reformers were returned to Prague
Dubcek was forced to resign as first secretary in April 1969 and for the next few years a process of Normalization which included the Removal of reforms implemented in 1968 and those who had been instrumental in the reforms from the Communist Party of Czechoslovakia, mass media, judiciary, social and mass organizations. Economic enterprises, which had been given substantial independence during the Prague Spring were bought back into centralized control. Freedom of the Press Act revoked etc.