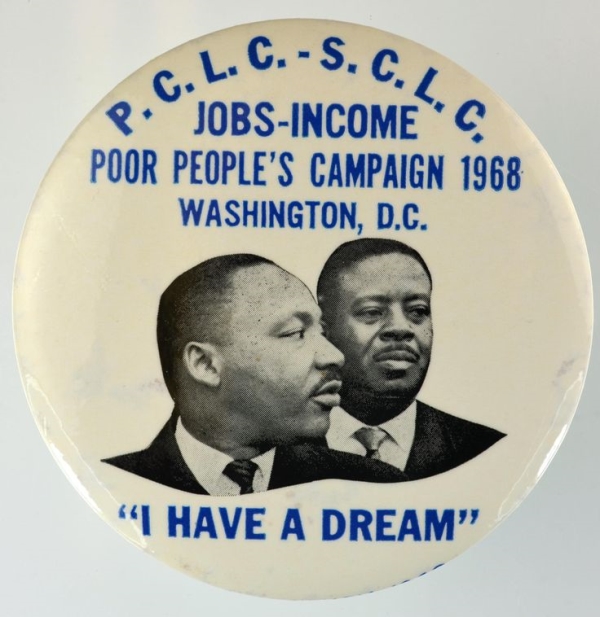 The Poor People’s Campaign, or Poor People’s March on Washington, was a 1968 effort to gain economic justice for poor people in the United States. It was organized by Martin Luther King, Jr. and the Southern Christian Leadership Conference (SCLC), and carried out under the leadership of Ralph Abernathy in the wake of King’s assassination.
The campaign demanded economic and human rights for poor Americans of diverse backgrounds. After presenting an organized set of demands to Congress and executive agencies, participants set up a 3,000-person protest camp on the Washington Mall, where they stayed for six weeks in the spring of 1968.
The Poor People’s Campaign was motivated by a desire for economic justice: the idea that all people should have what they need to live. King and the SCLC shifted their focus to these issues after observing that gains in civil rights had not improved the material conditions of life for many African Americans. The Poor People’s Campaign was a multiracial effort—including African-Americans, Asian-Americans, Hispanic Americans, and Native Americans—aimed at alleviating poverty regardless of race.
According to political historians such as Barbara Cruikshank, “the poor” did not particularly conceive of themselves as a unified group until President Lyndon Johnson’s War on Poverty (declared in 1964) identified them as such. Figures from the 1960 census, Bureau of Labor Statistics, U.S. Commerce Department, and the Federal Reserve estimated anywhere from 40 to 60 million Americans—or 22 to 33 percent—lived below the poverty line. At the same time, the nature of poverty itself was changing as America’s population increasingly lived in cities, not farms (and could not grow its own food). Poor African-Americans, particularly women, suffered from racism and sexism that amplified the impact of poverty, especially after “welfare mothers” became a nationally recognized concept.
By 1968, the War on Poverty seemed like a failure, neglected by a Johnson administration (and Congress) that wanted to focus on the Vietnam War and increasingly saw anti-poverty programs as primarily helping African-Americans. The Poor People’s Campaign sought to address poverty through income and housing. The campaign would help the poor by dramatizing their needs, uniting all races under the commonality of hardship and presenting a plan to start to a solution. Under the “economic bill of rights,” the Poor People’s Campaign asked for the federal government to prioritize helping the poor with a $30 billion anti-poverty package that included, among other demands, a commitment to full employment, a guaranteed annual income measure and more low-income housing. The Poor People’s Campaign was part of the second phase of the civil rights movement. King said, “We believe the highest patriotism demands the ending of the war and the opening of a bloodless war to final victory over racism and poverty”.
King wanted to bring poor people to Washington, D.C., forcing politicians to see them and think about their needs: “We ought to come in mule carts, in old trucks, any kind of transportation people can get their hands on. People ought to come to Washington, sit down if necessary in the middle of the street and say, ‘We are here; we are poor; we don’t have any money; you have made us this way…and we’ve come to stay until you do something about it.'”