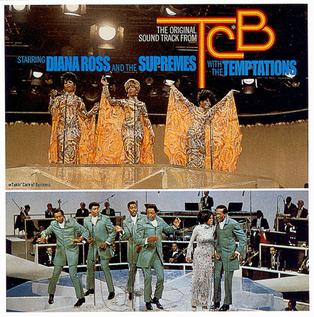 TCB is a 1968 television special produced by Motown Productions and George Schlatter–Ed Friendly Productions of Laugh-In fame.  The special is a musical revue starring Motown’s two most popular groups at the time, Diana Ross & the Supremes and The Temptations.  Containing a combination of showtunes, specially prepared numbers, and popular Motown hits, the special was taped before a live studio audience in September 1968 and originally broadcast December 9, 1968 on NBC, sponsored by the Timex watch corporation.  The title of the program uses a then-popular acronym, “TCB”, which stands for “Taking Care of Business”. Among the program’s highlights were Diana Ross’ “Afro Vogue” solo spot, Paul Williams’ emotionally charged rendition of “For Once in My Life,” a cover by both groups of the Aretha Franklin version of Otis Redding’s “Respect,” and then-new Temptations lead singer Dennis Edwards’ lead performance on “(I Know) I’m Losing You,” a song considered a signature for his predecessor, David Ruffin.

Pre-empting Laugh-In on Monday night, TCB was the first musical TV special of the rock era to air on American broadcast television.  It exceeded all performance expectations, winning its timeslot in the ratings and becoming the top-rated variety show of 1968.  A soundtrack album, TCB – The Original Cast Soundtrack was released a week before the special aired on December 9 and reached #1 on the U.S. Billboard Top 200 albums chart. It also became the third #1 album for Diana Ross and The Supremes.