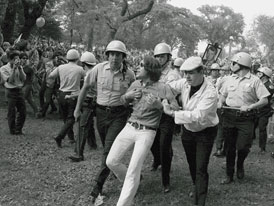 The 1968 National Convention of the U.S. Democratic Party was held August 26–29 at the International Amphitheatre in Chicago, Illinois. As President Lyndon B. Johnson had announced he would not seek reelection, the purpose of the convention was to select a new presidential nominee to run as the Democratic Party’s candidate for the office. The keynote speaker was Senator Daniel Inouye (D-Hawaii).
Vice President Hubert H. Humphrey and Senator Edmund S. Muskie of Maine were nominated for President and Vice President, respectively.
The convention was held during a year of violence, political turbulence, and civil unrest, particularly riots in more than 100 cities following the assassination of Martin Luther King, Jr. on April 4. The convention also followed the assassination of Democratic presidential hopeful Senator Robert F. Kennedy of New York, on June 5. Both Kennedy and Senator Eugene McCarthy of Minnesota had been running for the Democratic Nomination at the time.