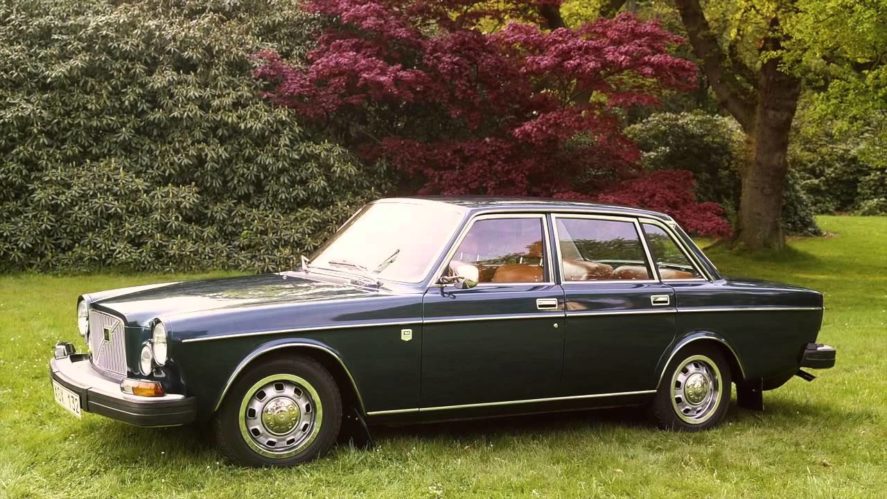 The Volvo 164 was a six cylinder sedan unveiled by Volvo Cars at the Paris Motor Show early in October 1968 for the 1969 model year. The company built 146,008 examples before production ended in 1975. Introduced with a faux wood dashboard, a six cylinder engine and an optional leather interior, the 164 represented Volvo’s first venture into the luxury segment since the demise of the PV 60 in 1950. Jan Wilsgaard designed the 164 — initially in the late 1950s as a concept car called the P358 powered by a V8. The P358 was cancelled when the home market was found too small. The front styling was inspired both by the Wolseley 6/99 and the Volvo P1900. In 1968 Volvo introduced the 164 as an extension of the 140-series, equipping the 164 with a 3.0 litre straight-6. The bodywork of the 164 from the windshield forward differed from the 140: including a longer bonnet accommodating the bigger engine and a larger, more prominent grille. The interior was equipped with a faux wood dash and optional leather. Cars built for the final (1975) model year show small signs of a facelift: new front seats and altered interior trim, and different badging on the trunklid. The 164 was powered by a 3-litre OHV straight 6 cylinder engine, the B30, which was a 6-cylinder derivative of the proven B20 4-cylinder engine that powered most other Volvo models. The 164 was the first 6 cylinder equipped Volvo in 10 years, since the PV800 series ceased production in 1958. 1969-1971 models were equipped with dual Zenith Stromberg 175CD2SE constant-depression carburetors. In 1972, Bosch’s first volume-production electronic fuel injection system, D-Jetronic,[2] was offered as optional equipment. Carburetors were dropped and “D-Jet” became standard equipment for the 1973 model year. Cars equipped with the fuel injection were badged as 164E models, the “E” standing for einspritzung (German for fuel injection). Like other fuel-injected Volvos, the 164E models gave improved performance and driveability with less-toxic exhaust emissions than their carbureted counterparts. Being one of the first fuel injection systems on the road, however, the D-Jetronic system gained something of a reputation for being difficult to keep in proper repair. Transmission options included a manual 4-speed (M400) gearbox, which was known as the M410 when equipped with the optional electrically-operated Laycock de Normanville overdrive. Both the M400 and M410 had Volvo’s “remote control” shifter, which used a conventionally short, vertical shift stick placed between the front seats. Manual-shift models other than the 164 and the P1800 continued until 1971 to use Volvo’s direct-control shifter, featuring an extremely long, almost horizontal shift lever with its pivot point well under the dashboard. A 3-speed automatic transmission, the Borg Warner BW35, was also offered. The automatic shift selector was mounted on the steering column from 1969 through 1972, and on the floor from 1973 through 1975. Despite its rough operation and inefficiency, the BW35 was popular in the North American market. The 164 was only offered as a 4-door sedan, and shares many body and chassis components with its 144 forebear. From the cowl rearward, body sheetmetal is identical. The front was lengthened 100 millimeters in wheelbase and 60 millimeters in overall length to accommodate the longer 6-cylinder engine. Because of the shared components between the 140 and 164, several private parties have constructed station wagon and 2-door hardtop versions with 164 front ends. Despite strenuous calls from North American Volvo dealers for a 6-cylinder Volvo station wagon, Volvo is said[who?] to have produced only a single 165 estate car (with a long wheelbase), pictured below. This car may have been given to designer Jan Wilsgaard on his retirement from Volvo. When developing the 262C coupé in the mid-seventies, Volvo employed a 164 as a testbed. The resulting two-door “162” with a lowered, vinyl-covered roof (recognizable in the later 262C) remains on display at the Volvo Museum in Gothenburg, Sweden.