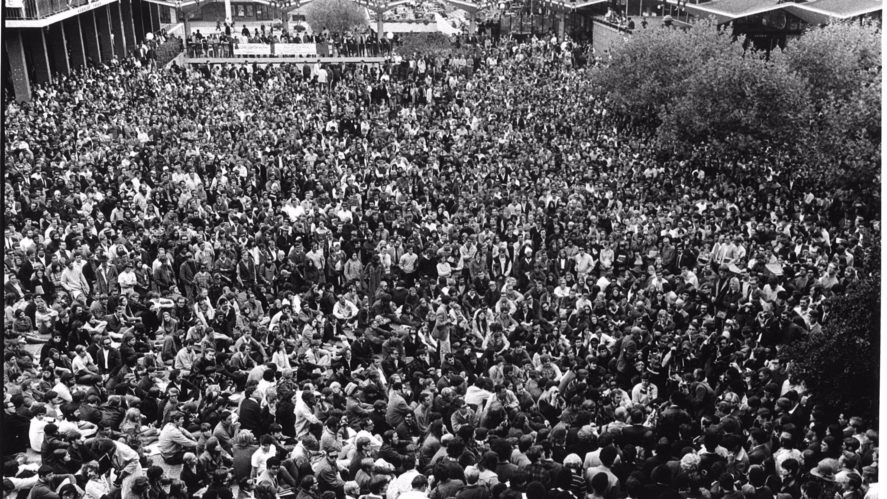 The major political/counterculture/New Left/radical events in Berkeley in 1968 were the Telegraph Avenue riots; the Eldridge Cleaver Social Analysis 139X controversy in the context of the new Yippie movement; and the Vietnam commencement. Telegraph Avenue Riots The first round of riots on Telegraph Avenue started in late June with a demonstration organized by Peter Camejo and the Socialist Workers Party in support of the student-worker strike in France. The second round took place in response to the police riot in Chicago during the Democratic National Convention. The Barb covered the riots thoroughly and with conviction. After four years of non-violent Berkeley demonstrations, things got rough in the summer of 1968. Police used mace and tear gas for the first time in Berkeley, heads were cracked, rocks were tossed, and barricades and fires lined Telegraph at night. The July 5th Barb reported that a guard shack near the west entrance to campus had been dynamited. Governor Reagan never tired to repeating this story.

The Telegraph Avenue Bank of America still had windows. That would change soon. A new rhetoric arose, using vocabulary that would become more prevalent a few years later during temporary autonomous zone movements. “Liberated zone” and “Commune” were the big new words – commune not as in group living but as in the Paris Commune of 1871, a radical, socialist, somewhat anarchist movement. In the July 12 Barb, a headline proclaimed: “Berkeley Commune: Street People Emerge as Underground Force”. We learned more inside: “The street people we talk with are deliberately non-organization and non-leader individuals who resonate with the original SF Diggers and the Up Against the Wall Motherfuckers in New Work.” The July 26 Barb gushed over the Commune’s power: “Commune Strikes Fear in Chamber’s Heart: The band of loosely affiliated street people known as the Berkeley communes giving more ulcers to Berekley’s established elite. The Chamber of Commere, with Mayor Wallace Johnson and Councilman John De Bonis, met Thursdaty morning to discuss how to deal with the Telegraph Avenue people. While the pressed suits are fighting panic, Berkeley’s street people are experimenting with varying success with their new form of non-organization.” Spoiler alert: the idea of non-orgnIzation came into fruition the next summer during the building and fight for People’s Park. Two of the groups within the Commune umbrella were the Delaware Affinity Group and the Persian Fuckers.

Haj Razavi One of the Commune leaders was Haj Razavi, an Iranian, and hence the name of his cadre – the Persian Fuckers. Laura J. Miller wrote: “Haj Razavi of the Persian Fuckers, a Berkeley hippie commune, stood on a box outside the store to heckle passers-by. Undercover cops, dressed up like people from the neighborhood, threatened Razavi with brass knuckles pulled from their jeans pockets. By the end of the summer, he had disappeared. The last time he was seen, he was heard saying, ‘Well, capitalist Cody, this is a summer you won’t forget, eh?’” The summer of 1968 on Telegraph was a tipping point that would play out in 1969 with the Third World Strike and then People’s Park. http://quirkyberkeley.com/berkeley-1968/