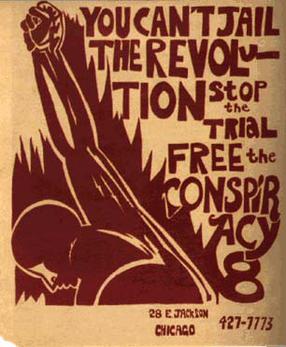 The Chicago Seven (originally Chicago Eight, also Conspiracy Eight/Conspiracy Seven) were seven defendants—Abbie Hoffman, Jerry Rubin, David Dellinger, Tom Hayden, Rennie Davis, John Froines, and Lee Weiner—charged by the federal government with conspiracy, inciting to riot, and other charges related to anti-Vietnam War and countercultural protests that took place in Chicago, Illinois, on the occasion of the 1968 Democratic National Convention. Bobby Seale, the eighth man charged, had his trial severed during the proceedings, lowering the number of defendants from eight to seven.

Seale was eventually sentenced to four years in prison for contempt of court, although this ruling was later reversed.

After a federal trial resulting in both acquittals and convictions, followed by appeals, and reversals, some of the seven defendants were finally convicted, although all of the convictions were ultimately overturned.

The eight defendants were charged under the anti-riot provisions of the Civil Rights Act of 1968[4] which made it a federal crime to cross state lines with the intent to incite a riot. The Chicago Eight indictments alleged crimes of three kinds: [5]