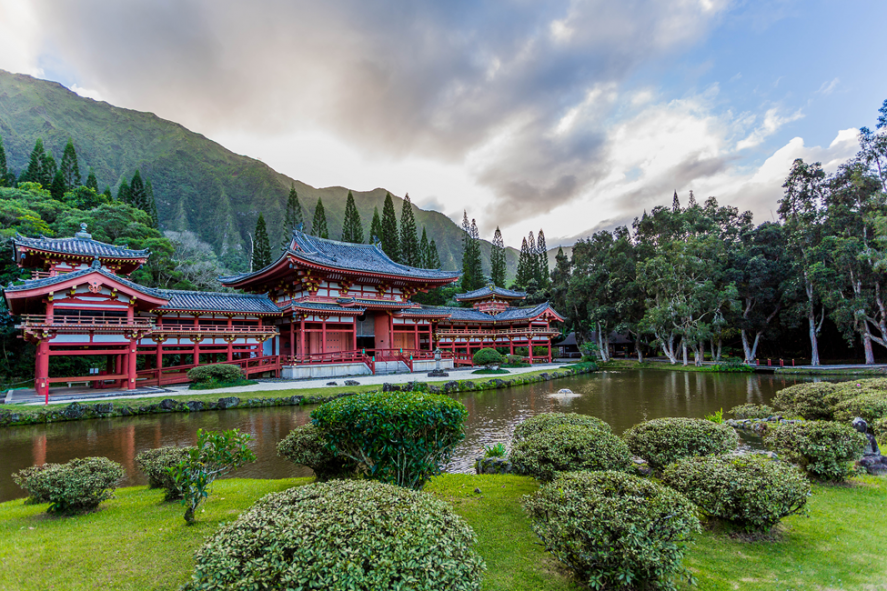 Oahu’s Byodo-In Temple was built to commemorate the 100th anniversary of the first Japanese immigrants to arrive in Hawai’i in 1868. The original temple in Japan is over 950 years old and was built out of wood without the use of nails. However, this temple is constructed mostly out of concrete.

The Byodo-In Temple (平等院, Byōdōin) is a non-denominational Buddhist temple located on the island of Oʻahu in Hawaiʻi in Valley of the Temples Memorial Park. It was dedicated in August 1968 to commemorate the 100th anniversary of the first Japanese immigrants to Hawaiʻi.

The temple is a replica of a 900-year-old Buddhist temple at Uji in Kyoto Prefecture of Japan. Contrary to popular belief, it is not a functioning Buddhist temple in the proper sense as it does not host a resident monastic community nor an active congregation. Inside the Byodo-In Temple is a 18 ft (5.5 m) statue of the Lotus Buddha, a wooden image depicting Amitābha. It is covered in gold and lacquer. Outside is a three-ton, brass peace bell. Surrounding the temple are large koi ponds that cover a total of 2 acres (0.81 ha). Around those ponds are lush Japanese gardens set against a backdrop of towering cliffs of the Koʻolau Range. The gardens are home to sparrows and peafowl. The temple covers 11,000 sq ft (1,000 m2).

The Byodo-In Temple is visited and used by thousands of worshipers from around the world. It welcomes people of all faiths to participate in its traditions. Apart from worship, the temple grounds are also used for weddings and office meetings.