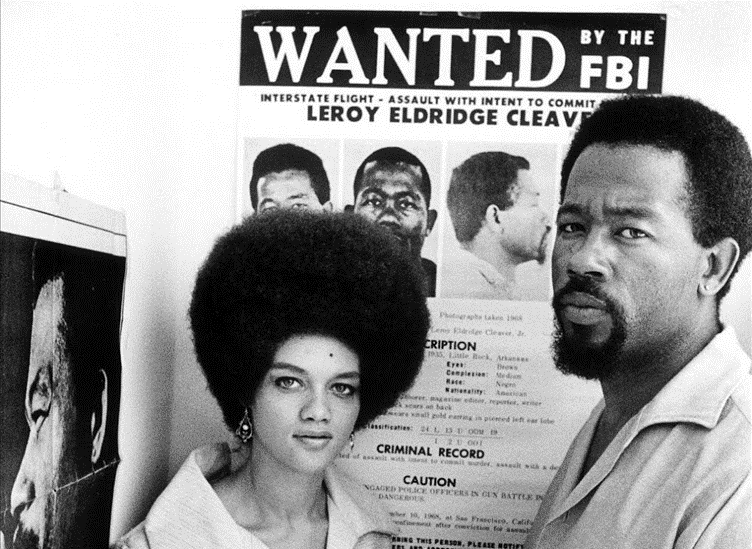 Leroy Eldridge Cleaver (August 31, 1935 – May 1, 1998) was an American writer, and political activist who became an early leader of the Black Panther Party.

n the aftermath of the assassination of Martin Luther King Jr. on April 4, 1968, there were riots across the nation. On April 6, Cleaver and 14 other Panthers was involved in a confrontation with Oakland police officers, during which two officers were wounded. Cleaver was wounded during the ambush and 17-year-old Black Panther member Bobby Hutton was killed. They were armed with M16 rifles and shotguns. In 1980, he admitted that he had led the Panther group on a deliberate ambush of the police officers, thus provoking the shootout.  Some reporters were surprised by this move, because it was in the context of an uncharacteristic speech, in which Cleaver also discredited the Black Panthers, stated “we need police as heroes”, and said that he denounced civilian review boards of police shootings for the “bizarre” reason that “it is a rubber stamp for murder”. Some speculated his admission could have been a pay-off to the Alameda County justice system, whose judge had only just days earlier let Eldridge Cleaver escape prison time; Cleaver was sentenced to community service after getting charged with three counts of assault against three Oakland police officers. The PBS documentary A Huey Newton Story claims that “Bobby Hutton was shot more than twelve times after he had already surrendered and stripped down to his underwear to prove he was not armed.”

Despite the fact that he had instructed Hutton to strip down to his underwear to demonstrate that he was unarmed, Eldridge Cleaver stated that police shot Hutton more than twelve times as he was surrendering.  Another account from Kathleen Cleaver states that Hutton was embarrassed to remove his clothing and so he only took off his shirt and kept on his pants. While the police maintained that he attempted to run away and ignored orders to stop,  Eldridge Cleaver stated that Hutton was shot by the police with his hands up. Cleaver also claimed that an Oakland police officer who witnessed the shoot-out later told him: “What they did was first-degree murder.” Cleaver and two police officers were also wounded. Bobby Seale, a fellow Black Panther, has since speculated that the police shot Bobby Hutton thinking they were shooting him.

Bobby Hutton’s death at the hands of the Oakland police was seen by those sympathetic to the Black Panther Party as an example of police brutality against blacks. Hutton was the first Panther to die and “immediately became a martyr for the cause of black power.”

Hutton’s funeral was held on April 12 at the Ephesians Church of God in Berkeley, California. About 1,500 people attended the funeral. A rally held afterwards in West Oakland was attended by over 2,000 people, and included a eulogy by actor Marlon Brando.

In 1968, Cleaver wrote Soul on Ice, a collection of essays that, at the time of its publication, was praised by The New York Times Book Review as “brilliant and revealing”.  Cleaver stated in Soul on Ice: “If a man like Malcolm X could change and repudiate racism, if I myself and other former Muslims can change, if young whites can change, then there is hope for America.

Cleaver was a presidential candidate in 1968 on the ticket of the Peace and Freedom Party. Having been born on August 31, 1935, Cleaver would not have been the requisite 35 years of age until more than a year after Inauguration Day 1969. (Although the Constitution requires that the President be at least 35 years of age, it does not specify whether he need have reached that age at the time of nomination, or election, or inauguration.) Courts in both Hawaii and New York held that he could be excluded from the ballot because he could not possibly meet the Constitutional criteria. Cleaver and his running mate Judith Mage received 36,571 votes (0.05%).