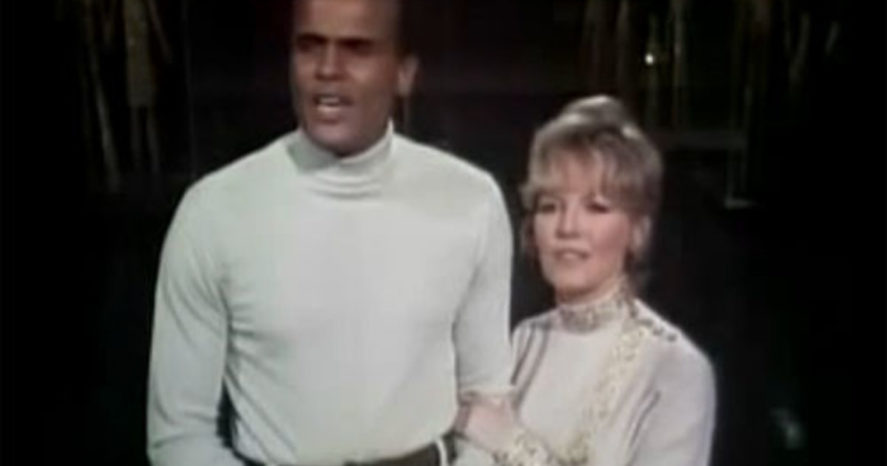 50 Years Ago, a White Woman Touching a Black Man on TV Caused a National Commotion

On April 2, 1968, America watched as, for the first time, a white woman touched a black man’s arm on primetime television. The white woman was Petula Clark, the two-time Grammy-winning British singer with a slew of top 10 hits, including “Downtown” and “My Love;” at the time, she was a popular guest on variety series ranging from Shindig!, Hullabaloo, and Where the Action Is (for the kids) to The Ed Sullivan Show and The Hollywood Palace (for the adults). The black man was Harry Belafonte, the Grammy-winning American singer and civil-rights advocate whose signature tune, “The Banana Boat Song,” brought calypso music to a mainstream audience. That fleeting moment was controversial enough to prompt an executive with the Chrysler Corporation, the program’s sponsor, to protest vehemently—turning what one critic would eventually call “a stylish, sophisticated musical hour” into an inter-racial cause célèbre.

To this day, Clark cannot believe that “the incident” caused such a “rumpus.” She didn’t invite Belafonte to appear on the special in order to make a cultural statement: “As far as I was concerned, he was just a great artist,” she says now. “I’m a very organic performer. There are no big statements. Things just happen.”

“To this day, I can’t think of another special that had such an impact on me as far as the emotional drama and trauma,” director Steve Binder tells Vanity Fair. (This from the man who directed The Star Wars Holiday Special.) He also directed some of television’s finest hours, including Elvis, the 1968 so-called comeback special, and Diana Ross: Live in Central Park, as well as what some consider to be the best rock-concert movie, period: The T.A.M.I. Show. (It’s the one in which James Brown upstaged the Rolling Stones.) Binder was recruited to step in when the special’s original director didn’t click with the Clark, putting the project in peril. “I got this panicked phone call to fly immediately to Switzerland, where Petula and her husband, Claude Wolff, had their winter home,” he recalls. “I pitched her my concept of the kind of specials I wanted to do—created from scratch and tailored to the artist, so that if the artist wasn’t able to execute it, that would be the end of it.”

A whirlwind 72 hours later, a “wiped out” Binder was back in Los Angeles. He got the call; Petula was in.

Belafonte was their first and only choice for a guest star. He did not do a lot of television at the time. “I was very careful how I exposed myself on the very carnivorous technology called television,” he tells Vanity Fair. “It can grind you up, spit you out, and exploit you to the point of boredom [from the audience]. I took care on what shows to do and how often. I guess it worked out.”

Why did he agree to do Petula? For starters, he was “in love with Petula Clark,” Belafonte jokes. “She was very much in the forefront of popular culture. When she asked me to do the special, I was very flattered.” Belafonte, an activist and a force in the growing civil-rights movement, also saw the special as an opportunity to send a message. He hoped that if the experience was rewarding to Clark, networks might understand that specials showcasing integrated artists and entertainers “were not quite the taboo they had made it,” he says.

Binder further recalls that when Belafonte agreed to do the show, he told Binder, “We can do something really special [with this show]”—to which Binder prophetically replied, “That, I promise you.” Getting Clark’s guest on board was a coup. A Chrysler executive indicated his approval when he responded to Belafonte signing on by joking to Binder, “What color do you want the Plymouth car we’re delivering to your door?” the director recalls.

The enthusiasm was short-lived. Within 15 minutes of that phone call, another executive called Binder to inform him that Doyle Lott, the advertising manager for the Plymouth Division, objected to a black man appearing on the show. Binder responded, “If you try to replace Belafonte, I’m going to go on national television and say exactly what you just said.”

An hour later came another call, and a compromise proffered. Belafonte could stay on the show if a white guest of equal stature also appeared. Among the names suggested were Milton Berle and Ray Bolger, best known as the Scarecrow in The Wizard of Oz. Binder refused, and flew to Detroit to meet with Glenn E. White, Plymouth’s general manager. Lott was also in attendance. According to Binder, White asked, “Is Petula happy?” Binder said, “Absolutely. We have one of the greatest guest stars in the world. I want to move forward.” With that, Binder remembers, White turned to Lott and said, “As long as Petula and Steve are happy, we shouldn’t interfere.” That’s when Lott ”jumped out of his seat, big smile, and says, ‘I’ll see you at the Emmys, Steve.’ ”

Petula was all about the music. Belafonte premiered Joni Mitchell’s “Both Sides, Now” (Judy Collins’s hit version was released later in the year). Clark performed several of her hits, including her latest at the time, “How are Things in Glocca Morra,” featured in the film Finian’s Rainbow. Clark and Belafonte agreed to duet on “On the Path of Glory,” an anti-war song Clark had co-written. Binder’s original staging of the number had Belafonte downstage and Clark upstage, glimpsed over Belafonte’s shoulder. “It was great visually,” Binder says, “but it didn’t feel like they connected. After a few takes, I told Petula to try one where she walks downstage to Harry’s side. That’s when the magic happened; the emotion of the lyrics [resonated] in their voices and on their faces. All of a sudden, she reaches over and puts her hand over Harry’s forearm.“

It was not so radical, really. By then, Bill Cosby had shared co-billing with Robert Culp and won consecutive Emmys for I Spy. In 1967, Nancy Sinatra kissed Sammy Davis Jr. on her special, Movin’ with Nancy, without incident. “The kiss wasn’t planned,” Sinatra said in an e-mail to Vanity Fair. “We kissed hello and goodbye all the time. We loved each other as family.” But when Petula touched Harry, Binder recalls, “You could hear an explosion coming out of the client’s green room. Doyle Lott had left the building. “He doesn’t want that shown on her special,” Binder was informed.

“I didn’t hear all the rumpus that was going on upstairs in the control area,” Clark says. “Touching his arm was just instinctive because we felt strongly about the subject. I just didn’t think about it.”

For his part, Belafonte thought there had just been a technical glitch. He did not think the touch was problematic: “Quite the contrary,” he says. “I was quite pleased. That song, if I remember, was the last thing we shot. There was an enormous sense of release that we had pulled this off without a hitch. It was one guy—Doyle Lott—who said we had to re-shoot what we had just done. We were nonplussed as to what was the problem.” NBC, alerted to the controversy, called Binder to say the network would back him (“That was a great phone call to get,” he says). With that, Binder and Wolff rushed to the studio basement to confront the editor and order him to keep the take where Clark touched Belafonte’s arm—and to erase the others so they could not be used in the broadcast.
Somehow—Binder doesn’t recall what did it—word of the controversy got out early, resulting in breathless pre-broadcast news coverage. “Incident at TV Taping Irks Belafonte,” said a March 7 headline in The New York Times. The article quoted a statement from White: ”If there was any incident . . . it resulted solely from the reaction of a single individual and by no means reflects the Plymouth Division’s attitude or policy on such matters.” Lott’s Detroit office also issued a statement: “I was tired. I over-reacted to the staging, not to any feeling of discrimination.” Binder remembers hearing that Belafonte was about to tell America to boycott Plymouth on The Tonight Show; he called the singer to tell him it wasn’t the car company’s fault, and reminded Belafonte of his conversation with White.

On March 10, the Times reported that Lott had been “relieved of his responsibilities.” (Lott died in 2006 at the age of 88.)

Despite, or perhaps because of, the brouhaha, Petula received good ratings and reviews. The Seattle Times called it “simply smashing.” Newsday hailed Clark as “the nicest thing to happen to television and viewers in ages.” Reviewers dismissed the touch out of hand: “the friendly gesture would have gone unnoticed by most viewers had it not caused an advance incident,” the Milwaukee Journal said. (Binder recalls a less enthusiastic review from the Thunderbolt, the official newspaper of the Ku Klux Klan, that he happened to see when he was in Georgia working on another project.)
In the aftermath of the special and the coverage that “the touch” generated, Belafonte was compelled to write a piece for The New York Times that ran on April 21. In it, he considered the status of black people on television and found it wanting. “The real beauty, the soul, the integrity of the black community is rarely reflected,” he wrote. “The Negro artist on TV is not free to reflect the world from which he comes, with its particular richness, cultural values, and problems.” Two further television milestones in regards to race would occur later in the year: the premiere on September 17 of Julia, the first sitcom to star a black woman who had a professional career, and the November 22 Star Trek episode “Plato’s Stepchildren,” which featured an inter-racial kiss between William Shatner’s Captain Kirk and Nichelle Nichols’s Uhura.

Binder, now 85, published a book called Fade Up: The Movers and Shakes of Variety Television in 2016. Belafonte, 91, works with young people and is actively “trying to sort out ways we can bring a better design to the criminal justice system.” Of the special, he reflects, “We’re always looking for some grand display to make our democracy show the better side of itself. But most of the things that I think turn out to be enduringly effective are the small things done out of innocence; like two artists coming together. Delighting the listener might have had a greater impact on integration and the beauty of the idea than some grand political statement. But then again, there is always a fly in the ointment.”
And Clark, 85, released the album Living for Today in 2017, and also recently toured the U.S. for the first time in five decades. She is currently recording an album of French-Canadian songs. To this day, she says, she doesn’t know quite what to say about her special’s legacy. “If it was an important moment, I’m glad,” she allows, “but the choice we made was about the artistic content. Forget about the whole black and white thing; this was the way it was supposed to be.”