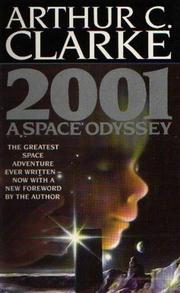 2001: A Space Odyssey (1968) is a science fiction novel by Arthur C. Clarke.
It was developed concurrently with Stanley Kubrick’s film version and published after the release of the film. The story is based in part on various short stories by Clarke, most notably “The Sentinel” (written in 1948 for a BBC competition but first published in 1951 under the title “Sentinel of Eternity”). For an elaboration of Clarke and Kubrick’s collaborative work on this project, see The Lost Worlds of 2001, Arthur C. Clarke, Signet, 1972.
The first part of the novel (in which aliens nudge the primitive human ancestors) is similar to the plot of an earlier Clarke story, “Encounter in the Dawn”.