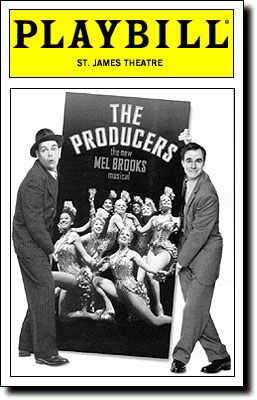 The Producers is a 1968 comedy film written and directed by Mel Brooks, which tells the story of a theatrical producer and an accountant who attempt to cheat their investors by deliberately producing a flop show on Broadway.
The film stars Zero Mostel and Gene Wilder and features Dick Shawn.
The Producers was the first film directed by Mel Brooks, who won an Academy Award for his screenplay.
It was shot at the Chelsea Studios in New York City.
Source: Wikipedia Added by: Aimee Lucido
Theatrical producer Max Bialystock (Zero Mostel) was once the toast of Broadway. Now he lives in his seedy office, cadging cash contributions from wealthy old ladies in exchange for sexual favors. Even worse, he’s reduced to wearing a cardboard belt. Max’s new accountant, Leo Bloom (Gene Wilder), the soul of honesty, suggests that Max produce a hit to try to recoup his losses, but Max knows that it’s too late for that. Offhandedly, Leo muses that, if Max found investors for a flop, he could legally keep all the extra money. Suddenly, Max’s eyes light up — and in that moment, Leo Bloom is gloriously corruptible. “I want everything I’ve ever seen in the movies!” cries Leo as Max embraces him. Together, Max and Leo conspire to select the worst play, the worst playwright, the worst director, and the worst actor to collaborate on their guaranteed flop. That play is Springtime for Hitler, “a delightful romp…with Adolf Hitler and Eva Braun.” The playwright is Franz Liebkind (Kenneth Mars), an unreconstructed Nazi who, in drunken delirium, insists that Hitler was a better painter than Churchill — “He could paint an entire apartment in one afternoon, two coats!” The director is pompous transvestite Roger De Bris (Christopher Hewett), who is preparing to go to a costume party garbed as Marie Antoinette when Max and Leo come calling (“Max, Max, he’s wearing a dress”). And the star, selected after extensive auditions, is hippie-freak Lorenzo St. DuBois (Dick Shawn) — “L.S.D.” for short. At the end of several weeks, Max has sold 25,000 percent of the show; and, as a finishing touch, Max bribes the opening-night critics for a favorable review, knowing full well that such a gesture is the kiss of death. The curtains part, and Springtime for Hitler opens with perhaps the most tasteless production number in the history of films. At the end of this extravaganza, the audience sits in dumbfounded silence. Gleefully, Max and Leo repair to a corner bar to celebrate their failure. But then…. The first directorial effort of Mel Brooks, The Producers didn’t do so well on its first release, but since that time it has taken its place as one of the all-time great movie comedies. ~ Hal Erickson, All Movie Guide