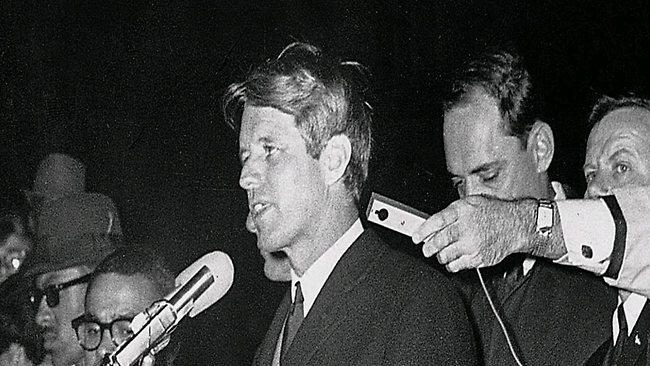 A speech on the assassination of Martin Luther King, Jr. was given by New York Senator Robert F. Kennedy on April 4, 1968.

Kennedy was campaigning for the 1968 Democratic presidential nomination. He had spoken at the University of Notre Dame and Ball State University earlier that day. Before boarding a plane to fly to Indianapolis for one last campaign speech in a predominantly black neighborhood of the city he learned that Martin Luther King, Jr. had been shot, leading Kennedy press secretary Frank Mankiewicz to suggest that he ask the audience to pray for the King family and ask them to follow King’s policy of non-violence. They did not learn that King was dead until they landed in Indianapolis.

Both Mankiewicz and speechwriter Adam Walinsky drafted notes immediately before the rally for Kennedy’s use, but Kennedy refused Walinsky’s notes, instead using some that he had likely written on the ride over; Mankiewicz arrived after Kennedy had already begun to speak. Right before arriving at the rally the Chief of Police in Indianapolis told Kennedy that he could not provide protection and that giving the remarks would be too dangerous, but Kennedy decided to go ahead regardless. Standing on a podium mounted on flatbed truck, Kennedy spoke for just four minutes and fifty-seven seconds.