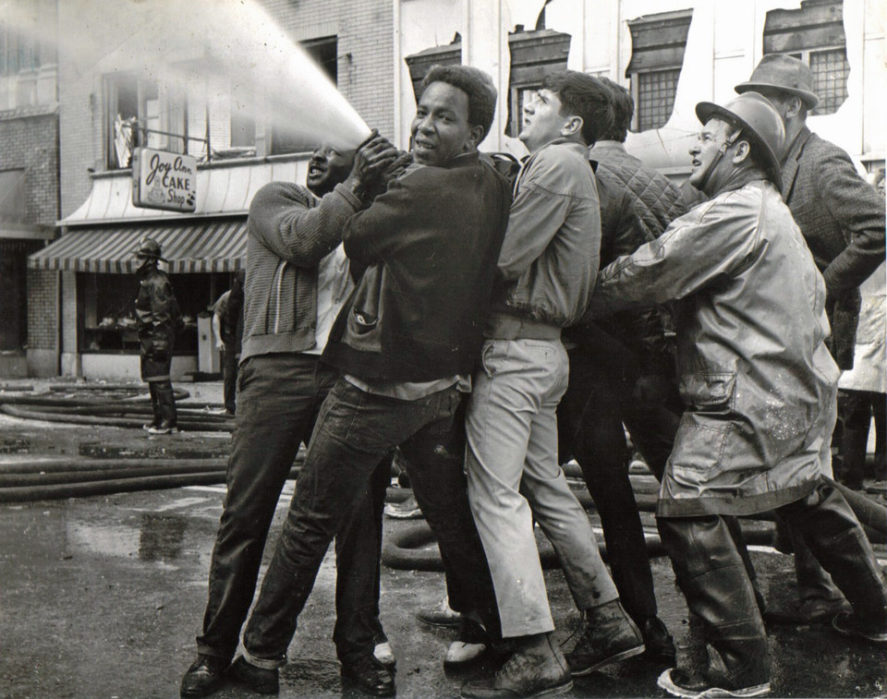 The explosions killed 41 people and injured more than 150. The primary explosion was due to natural gas leaking from one or more faulty transmission lines under the Marting Arms sporting goods store, located at the intersection of 6th and Main streets. A secondary explosion was caused by gunpowder stored inside the building.

Twenty buildings in and adjacent to the site of the explosion were condemned as a direct result of the explosions. Ultimately, the main street through downtown Richmond was permanently closed to traffic and the Downtown Promenade was built in 1972 (later expanded in 1978). This five-block pedestrian mall was converted to allow the street to be reopened to traffic 29 years after the explosion, in 1997, as part of an urban revitalization effort.

A simple curved brick memorial honoring those lost in the tragedy was erected in the downtown, with metal lettering: In memory of the forty-one persons who lost their lives in the tragic downtown explosion April 6, 1968 and with everlasting gratitude to those who helped give rebirth to this city.

Two explosions rocked downtown Richmond at 1:47 p.m. April 6, 1968, killing 41, injuring many more and permanently changing the landscape of the community.

“I often think how many people were affected that day,” said Jack Bales, the lone survivor who was in the Marting Arms store. “It was not only a tragedy in downtown Richmond, but for the whole area. We should never forget it.”

An explosion and fire ripped through nearly two blocks of Main Street here Saturday, killing at least 16 persons and injuring more than 100 others.

Capt. Robert Konkle, state police chief of operations, said the rubble of eight buildings – three destroyed and five damaged – may yield “10 to 50 more, depending on how many were in the buildings.”

Bulldozers were brought in to shove aside the debris piled up along the two-block stretch of Main Street, which is also U.S. 40.